It was summer , and as I sat drinking a nice cool cocktail on my deck in the evening , I thought to myself ,”I would like to shoot a really nice whitetail ,” Not just ordinary whitetail , but a true giant . I was thumbing through some hunting magazines , and article after article ,it seemed the Midwest was the place ,Iowa, Nebraska , Kansas not high hunter numbers , a lot of deer , and bucks actually had a chance to reach 4 ½ to 5 ½ years old . That was the kind of deer I was after . I know it seemed crazy as I live in southeast Michigan ,and have access to some pretty good hunting land , but due to such long hunting seasons , tons of hunters ,very , very few bucks seem to survive more than 2 ½ years old, which just isn’t long enough for a buck to sport truly record class horns . Please don’t think that I am some snobbish trophy hunter, I love to hunt and  eat venison. I think the taking of game , no matter the size , and utilizing it for food is the only real true hunting , large horns are just a bonus . But still I thought if I am ever to shoot a true monster of say 150” to (gulp ) 200 “, I had to start going to where those deer lived .So the bow season began , I saw the usual small 6 and 8 point bucks , had plenty of opportunities to shoot  , but elected to pass, hoping for a really nice buck , which by my last hunt of the year  on 12/31/08 , evaporated as the sun sank into the cold western  Michigan sky.

As I surfer on the computer , looking for a place to go next fall , my phone rang , my friend George asked me if I was going to the Safari Club International Detroit Chapter Auction fund raiser , I of course said yes .While at the dinner I talked to an outfitter, Rob Spence of Whitetail Trophy Hunts in Steinaur  Nebraska , which was very near where I did some turkey hunting , so I knew there where big deer  there . I made arrangements to hunt the first week of November , which “should “ be the height of the rut ,the bucks should be going crazy by then . So as I was driving from Michigan to Nebraska on November 5th , I saw a lot of nice bucks , right during the middle of the day , although it wasn’t as cool as I though it would be, as the temperature was 65 degrees , which seemed abnormally high for November. I arrived without a hitch , unpacked my stuff , it was already too late to hunt that evening , so I grabbed me Mathews DXT , and shot about 20 arrows from various yardage ,all the arrows sizzling into the bulls eye at 335 feet per second,  the bow was dead on ,I was ready !!

My first stand the following morning was a great looking spot ,when it got light enough to see , I was perched in a cedar tree , over looking a food plot , heavy cover behind me , plus a large pond on my right which would not only funnel deer past my stand , but they would be on the upwind side , everything was perfect ….Around 8:30 am , I heard the crunching of leaves , closer it came , I instinctively ever so slowly reached for my bow , while slowly pivoting around to see what it was .through the limbs I could see a large bodied buck ,and although I didn’t get a great look at the horns , I thought it must be a nice buck ,as the body was very big , probably well over 200 lbs . The buck finally cleared the brush and continued toward my stand , but getting a good look at the rack although he had a monster body the horns were lacking both height and width , he paraded right under my stand, stared at my Montana decoy,  and continued out into the food plot , other does and yearlings soon followed . After a few hours, and when the deer had all left , and no more deer showed up I climbed down and headed back to camp. Seeing that is was only day one, and I already ad a shot opportunity, I was in great spirits, when I returned for lunch. Even though the temperatures were above 75 degrees which was strange for the second week of November, certainly it would cool off , and perhaps even snow , or so I thought , as I was prepared having brought along my heaviest warm hunting suit and boots .but as the days passed, the weather actually got warmer hitting over 80 degrees, which is way too hot for rutting bucks to be out chasing does. Seemed as soon as the sun came up, deer activity all but disappeared. As it would be opening day for gun season in my home state of Michigan , and the weather in Nebraska was going to stay warm for some time , I decided I would hunt tomorrow morning , then pack my truck in the afternoon, and head for home the next morning early, and be home in time to hunt the opening day of gun season with my son Shane , which we have not missed an opener since he was old enough to hunt.

That night I’m thinking how “unlucky “I was, here it was the second week of November, and the temperature was over 70 degrees most days , and sometimes as high as 80. In that kind of  heat had all but shut down deer movement , but I figured , stay ready , as you never know , it was the bottom of the ninth , and 2 outs ,

About half way back I decided to sit down , and have a juice box , as it was warm , as I sat there on top of this big hill just taking in the sight, as I could see for about a mile in all directions. I sat and glassed, actual saw the coyotes I had seen earlier in the morning, as I scanned the prairie grass, I spotted movement … a buck! … He was heading for the river bottom , he was parallel to me , but walking with purpose . Then it dawned on me, perhaps he was heading for the rubs I saw from the stand this morning? The race was on , I left my pack and ran the mile back to the stand , but figured I would be better off staying on the ground . I got close to the river, when I saw him come over the hill walking on a course that would take him 40-50 yards from my position. I started range finding saplings, bushes etc.. Until I had a pretty good idea of the various ranges, on he came walking with purpose, as I came to full draw , the bush I had ranged earlier told me the yardage “52 yards “.  I settled my 50 yard pin , right in the middle of his body , did my best doe bleat , and when he stopped I squeezed my Winn Free release , sending a Rage broad head tipped arrow from my Mathews DXT  , that hit spot on right behind the shoulder. I actually saw the arrow pass through and stick in the ground 8 yards behind him. The buck kicked his back legs high in the air , then tore off across the prairie, swallowed up by the chest high grass.

I couldn’t believe it! I made the quick call to Rob Spence, that I had hit a buck , a few minutes later , we found him piled up a short 80 yards away . It was hectic, but I quartered him, caped him out and had him in the cooler by 2 pm …. Talk about last minute , so sometimes if you keep an open mind, stay flexible ,and react quick, , do some out of the box thinking , things have a way of working out …Sometimes it’s better to be patient and sometimes you have to make a move…..oh yeah .. By the way, I did get home the day before the Michigan gun season , and shot a nice 8 point at 8 am on opening morning…… go figure….. 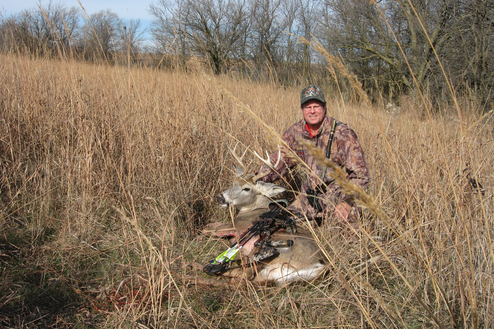 As I walked to my stand in the dark, not using a flashlight and being really careful not to make any noise, I was using every trick I knew, I set my Montana doe decoy facing away from my tree some 30 yards from the stand. Sprayed some doe in heat scent just behind the decoy, I climbed the tree, and hoisted up my Mathews DXT and settled in my stand over looking the hay field, on the edge of the river. At first light, I pulled out my rattling horns, clashed them together, for about 45 seconds, then made a series of grunts, right away, here came a small buck. But it was only a small six point  he walked right up to the decoy , sniffed at it’s butt then walked  under my tree and made a scrap, while seemingly staring right up at me as he licked and rubbed the overhanging branch , putting on a show for the Montana decoy. I was thinking, why couldn’t he be a big mature buck, instead of a 6 point?

That’s how it goes I thought, so why not just enjoy the morning; I saw prairie chickens, coyote’s, and numerous deer, but nothing big. While glassing around the stand I did notice some large rubs about 50 yards away , in the timber by the river , if only a big buck would walk by ,and see the decoy , and walk over !! But it was not to be , as it was 10:30 am ,I decided to climb down , and walk the 1 1/2 miles back to the truck .