Headline Reads, “Father and Son Team do it again”.” Lloyd Kimmen and his son, Shane traveled to Alberta, Canada, to take a Pope and Young record book Mountain Lion”. That was the headline in The Macomb Daily Newspaper this January. My son, Shane videotaped that hunt for me. Now some 9 months later I would be returning the favor.

We scouted hard the month of August and early September. We had a couple of bucks spotted and patterned pretty well. We hung a half dozen tree stands, and felt pretty confident. Although we had seen a couple of 8 points, we just couldn’t find a real trophy that particular year, or so we thought. We were talking over dinner one night, when my wife Sue said” you guys should check out this one field, almost every afternoon on my way home there is a really big buck out in that bean field chasing 3 to 4 does around”. We said, “OK”, but as every deer hunter knows, bucks don’t chase does around in early September, right? So the next afternoon we decided to glass that field for a couple hours, just to see what Mom was so excited about. Sure enough right before dark, 4 deer appeared at the far end of the field. At over 400 yards, and in bad light, yes, we could see the deer had horns, but we couldn’t tell how big. 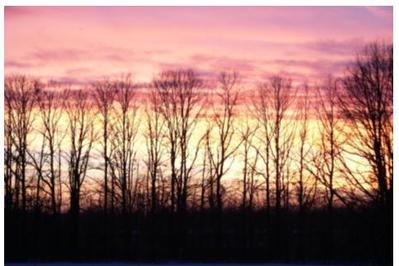 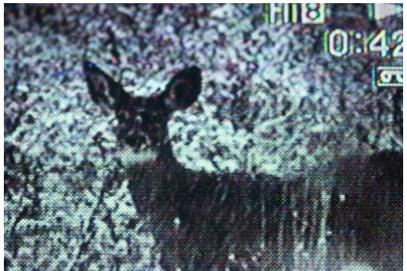 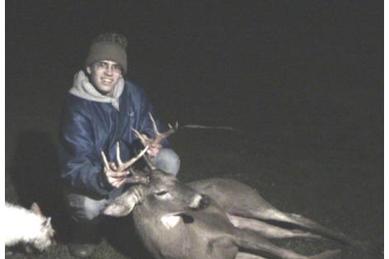 With the new junior deer season slated to start the third Saturday of September, less than a week away, it was decision time. As it was a Saturday and Sunday hunt only, it would be an all or nothing proposition. WE had basically Saturday for Shane to gun hunt with his 20 Gauge 870 Remington, and on Sunday he could bow hunt,(as our county is closed to gun hunting on Sundays, what a ridiculous law).

Now we had to pick a stand, as the weather was supposed to be warm and raining on Saturday, the wind out of the southwest, that narrowed it down to 2 stand locations. The first held at least 3 different bucks, ranging from a smallish 6 pointer, to a pretty respectable 8 point, with about a 17 inch spread. The second was the bean field that held,” Mom’s mystery buck”, we hadn’t hung any tree stands at that location, as we only took one quick scouting trip through it, and made a quick ground blind, and hurried out of there, as I’ve learned long ago, the less you disturb an area, especially if you think it may harbor a mature buck, the better off you are. I thought long and hard the rest of that week, and I always try play the percentages, my son Shane and I both agreed that we should hunt the tree stands Saturday morning, and if we didn’t see anything, we would hunt,”Mom’s buck” that evening.

When I got home, it was around 2:30 P.M., the sky a slate gray color and still a slow steady drizzle, this on top of almost 2 inches of rain we had received in the last twenty-four hours. I could see Shane had his high rubber Lacrosse boots and Sterns Mad Dog rain suit hanging in the garage; it looked like we would be going hunting this after noon.

So we loaded up the truck and headed up the road, splashing through each pothole along the dirt road. When we pulled into our hunting spot, we were horrified. To our amazement, the soybean field, for the most part was under, 1-2 feet of water!!! We sat there and stared out the truck window for a few minutes listening to the radio, wondering if we should try, not really knowing how deep it would be to try to cross the field to get back to the tree line. Finally I said what the hell, no guts no glory. Across the field we trudged, having already had water pouring over the tops of our boots in the first 50 yards from where we parked, we finally made the ½ mile walk to the woods edge. Low and behold there was a slight ridge, I shouldn’t say ridge, as it would be unnoticeable if it hadn’t rained, no more than a 2 foot rise in elevation, but it was dry, and it seemed to extend back into the woods a few hundred yards. This would be perfect, talk about a bottleneck, if those deer came to this field, they were almost forced into using the dry ground, no whitetail in its right mind would chose to walk through 18 inches of cold water. We cleared a spot on the down wind side of the dry ridge, I took up a spot about 20 yards behind him to watch all the action, sitting, our boots in 6 inches of water, Shane quietly fed three 20gauge slugs into the 870 pump gun, I was busy scanning the trees with the binoculars.

We raced each other splashing the entire seventy-five yards to the spot the buck was standing. What a surprise! There we could see the half submerged body of a huge buck, it’s left antler sticking high above the foot of water it was resting in. We both got there at the same time and grabbed the protruding antler, lifting his head from the water like some kind of sea monster. And a monster he was, his antlers, an almost perfect 9 point rack, tines well over 7 inches, the spread over 23 inches, and heavy, Wow! Later we would have him weighed in at the local meat market at 215 lbs dressed. An incredibly deer by anyone’s standards, it was a memory we will both never forget, splashing and dancing around in some 12 inches of water, giggling and laughing like a couple of 2 year olds, it was great.

Shane’s buck which we nicknamed” Mom’s Buck”, has now taken over my spot above the fire place, my buck, also a 9 point (only 20 inches wide), Shane says I can have my spot back if I shoot one bigger, no small feat.

Just the other day I was watching television, as nothing good was on I decided to plug in a videocassette of some of the first hunts I had video taped of Shane. It was a couple of years ago; opening day of firearm deer season, there was about 3-4 inches of fresh snow. In the morning I taped a few deer a couple hundred yards away, I fast-forwarded to the afternoon, we were both in our ground blind I had built for that first season he could hunt, it was large enough for both of us to sit comfortable. The snow was falling heavily as it was just beginning to turn to dusk, when I saw a deer approaching. Quickly, I turned on the camera, as Shane pulled the little 20 ga. Remington 870 to his shoulder. The deer was walking very slowly from our right to left, as he stepped into the open, about 45 yards away, it turned and looked straight at us, Staring intently at us for what seemed like an hour, I prayed it would give him a few more seconds, as Shane was lining up the sights. I whispered, “You better shoot it’s going to run …”. Before I could finish, the gun went off, the deer kicked its back feet out, usually a sign of being hit, but we looked at that tape 20 or more times, and we could all see the snow fly from the impact of the slug, just over the small deer’s back.

As I rewound the tape and played the shot over, I noticed something, that little deer wasn’t a doe after all, as I could make out little bumps, definitely a button buck. I also noticed something else, on the bridge of the nose he had a white slash, obviously either a birthmark or an injury, as the hair grew snow white in that spot. Glancing up, there was Shane’s buck over the fireplace; to my astonishment it had the same identical white mark as the little buck he had missed 2 years previously. It was the same deer!

Funny how fickle luck is?

At 6:00am my alarm went off, emitting its hideous sound that no human could ignore, sounding a little like running your finger nails down a chalk board, while standing on a cat’s tail, only worst. So, climbing out of bed I couldn’t help noticing the rain pelting the door wall glass, along with it, bright cobalt blue white flashes of lightning, illuminating the bedroom as if a light house was located in our very back yard. To call this “light rain in the am”, would be like calling hurricane Hugo, “blustery”.  So I put on a pot of coffee, and ponder if I should wake my 15-year-old son, Shane up at all. Then thinking about how pumped up he was about going hunting, I decide to wake him, just as a huge flash of lightning, followed instantly by what a howitzer must sound like fired off in your kitchen. We both jumped, and thinking better of it, I decide I would go in to work until noon, and Shane could sleep in, and we would hunt “Mom’s buck” Saturday evening.

It was still raining as I left work, although not nearly as violently as it had been all morning, over the radio, there were flash flood warnings all through the area. But at least the lightning had subsided. Now I know where that saying came from.” Come hell or high water”. 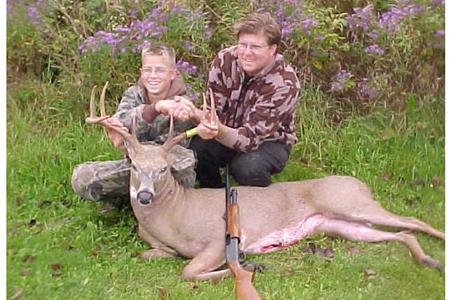 We never really heard them coming, suddenly 2 doe appeared, picking their way around all the puddles, finally emerging into the bean field, they both began to feed on the tender green shoots. I kept scanning the woods, looking for the buck, when I noticed Shane slowly raising his gun, oh no! I thought, he’s not going to wait and see if that huge buck shows up, he’s going to take one of the big does out in the bean field. I can see 2 more doe coming toward us through the woods, on the same path as the other 2 had taken just minutes before, they seemed to be about 60-80 yards from him I guessed. I was sure he could make the shot, as we shoot our slug guns out to 100 yards, even with iron sights, as he is real familiar with that little pump gun. I’m quietly hissing at him, not to shoot, wait for the buck, I can see him lining up the gun on one of the doe.

As the booming concussion of the shotgun and the splashing of four deer faded away, Shane turned to me and said,”Did you see it!” I said,”Yeah why did you shoot the doe, a buck might have been right behind those doe”? He said,” Doe, what I shot at was a huge buck, did you see where he went”? I said” I didn’t see any big buck run off”. After a short discussion, he pointed where the buck was when he fired, about seventy-five yards away, just behind the doe, hidden from my view by a bush. I told him” it didn’t run off”, he said,” Where did he go then?” I told him, “He must have dropped in his tracks” 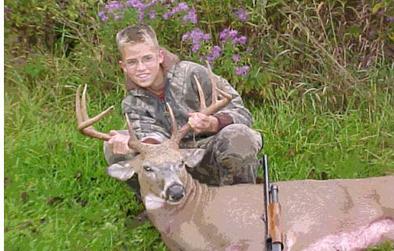