“OK Autumn; get em" That was her queue to track down not a pheasant ... but a 6pt Buck! My son Shane had hit the buck in the front shoulder with his 20 gauge 870 slug gun, but as the blood ran out some 100 yards from where he had shot it at dusk, I said,” lets go back and get the dog”. As we tracked that deer into the wee hours, sometimes wondering if we were still on the track, then we would find a little smear of blood, it was working!! Autumn, my 11 year old female chocolate lab, was going to find the buck! Through ditches, across railroad tracks, through woodlot after woodlot, we first jumped him about 1/2 mile from where he was hit; Autumn was really pulling hard on the leash, whining ever so softly out of shear excitement. We jumped that buck two more times that night, until I guess he finally ran out of blood. We finally were standing over the buck at around midnight, and yes he was hit in the front shoulder, maybe a little too far forward, but not that bad, I still think the slug somehow malfunctioned, either it got a bad load of powder or something. As I have dropped deer in there tracks with a similar shot. We ended up some 3 miles from the beginning, having jumped the buck 3 different times. This whole idea of using a hunting dog to track wounded deer really started when we used Autumn, on that first 6pt. buck, she was at the ripe old age of 11, although I couldn't really pheasant or duck hunt with her, as her hips were getting pretty bad, she was more than capable of tracking a fatally hit deer a few hundred yards. She was put to sleep the following year, so we only got a few tracking jobs out of her.

So lets get started, you will need a few things: First is a 10 to 15 foot leash, with a collar. The leash and collar will ONLY ever be put on the dog when it is training to track or actually tracking a wounded deer, never to go to the store, or for a walk. Use a different leash and collar for that. Second you will need a roll of kite string, a few hundred feet is good to start with, especially with a young dog. Next go down to the local butcher shop during deer season; get a fresh bloody deer hide, the bloodier the better. Even better if you or your buddy shoots a deer, as it is being gutted, soak the kite string in the deer blood, and wipe off the excess, store in the freezer in a zip lock bag. Now you have the tools to get started.

Next thing you will do, is either drag the hide on foot, or do what I prefer, tie it to my quad, and again start out in large grassy area. I have my son, Shane, pull the hide behind the quad, some 200 to 300 yards, and then I get Maggie my lab out, and put her on the track. I like to use the quad rather than drag the hide myself on foot, as your dog will begin to not only track the bloody deer hide, but also the person pulling the lure, you would be surprised how a dog can track human footprints, and you don’t want that!

The reason for using an open grassy area, easy, you can clearly see the quad tracks, so you know if your dog is following the track properly, and you can correct him, and get him on the right line. Just like with the kite string, you will gradually increase, not only the distance, but the time from when it was pulled, to the time you started tracking. I like to get it up to around an hour. Does it work? Let me give you an example, my wife and I were to meet a couple for dinner, I told my wife " lets make it 8pm as I wanted to bow hunt that evening". I am usually out of the woods at 6:30 pm, so I could rush home, clean up, change clothes, be on my way by 7:30pm, and arrive at the restaurant a little before 8:00pm for cocktails, perfect, right?

Well deer have a way of disrupting your plans; this one was in the way of a very heavily bodied buck. It was 6:10pm, when I had just finished putting down the rattling horns; here he came, at a slow walk. I drew my Mathews Conquest on him at 10 yards, and sent a Nuge blade tipped Beman 340 ICS shaft down through the top of his lungs. It seemed that upon release of the arrow, he exploded out of there, and was out of both sight and sound in a few seconds. The hit looked good; I could only see him from my tree stand for about 30 yards, as it was pretty thick where I was hunting. As time was of the essence, (you don't want to be late for dinner with your wife) , I picked up my son, Shane, and Maggie my black lab. I was back at my tree stand in 20 minutes, I put her on the track, and she immediately pulled hard. After about 50 yards or so we were on the blood, as the buck was slowing down. Another 150 yards later, there he lay. Shane held Maggie, while I quickly gutted the buck. The whole tracking job lasted maybe 4 minutes, I may have found it that night without the dog? Then again, I may have lost the trail too, if you ever had to quit a track, you know how bad you feel until you find the deer the following day. So give it a try I think you will be surprised how well it works, I’m to the point now that I take "Maggie" almost everywhere I go hunting, although we never got a chance to use her on a Moose hunt in Northern Ontario, (as we got skunked), she was along just in case. Oh yeah! I almost forgot,.…………. I walked into the restaurant at 8:05 pm. "Perfect"! 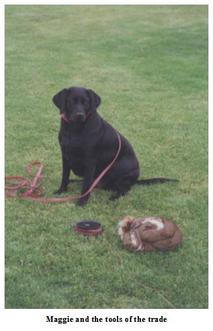 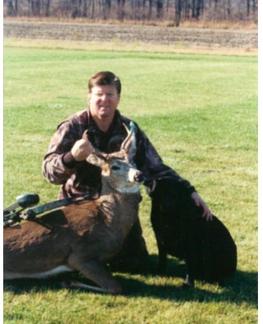 A few months later my Wife Sue, and two kids, Carly and Shane, brought home the cutest 6 week old black female Lab that we call "Maggie" short for” Magnum,” as a tribute to her mother was over 80lbs.I have always had Labrador Retrievers that I trained for field trials, and mostly hunted with them. These dogs always amazed me; they would naturally hunt most anything, rabbits, pheasant, duck and geese. What got me to thinking was watching my female lab, Autumn, track a pheasant for sometimes up to 300 to 400 yards before flushing it. If she could track a bird across barren ground, down ditches, into a field, how easy would it be to track a whitetail that was hit with a bow, or a gun? My reasoning was, A. a deer was a way bigger animal, plus, B.it would have the blood smell, even such tiny droplets that were invisible to the naked eye, would read like a road map to the Labradors incredible nose. All that was left was to train her to ignore healthy deer, raccoons, possum, and other critters and only track the one with the blood smell. Now, not only would she learn to hunt and retrieve birds, a certain amount of training would involve deer.

Now, I know what your thinking,” My dog will be chasing deer all over the county, and will end up shot!" The first thing that must be taught is obedience, either get a good book, or take some classes. Most people are too easy on their pets, a good dog only needs you to show them what you want, now, I can't speak for all breeds, but Labs want to please their master, it’s just instilled in them. 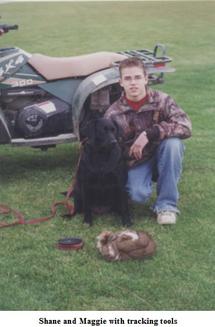 First unroll the string in a pretty straight line, start out in a relatively open area, unroll about 50 to 100 feet, place the deer hide at the end. Now go get your pup, put him on his special deer tracking collar and leash. Help him out if he gets off the track, you want SUCCESS every time, you want him to know the deer hide is always at the end of the track. Start him at the beginning of the string, encourage him in your nicest voice to follow the scent, sing the praise sweetly, "What a Good dog! Get em!!!"  And when he follows the string, and finds the bloody deer hide, really lay on the praise! Tell him he's the best! Really let him know how happy you are, because some day that could be your Boone &Crockett buck he just found! Gradually increase the distance, make turns, double back, try to trick him after he gets good, remember to watch him closely, as you are also training yourself, you are learning how he reacts to certain things. Take him out to the woods, lay your string down, go up hills, around trees, through ditches, soon you will find you cannot trick him, and that he needs very little help. Also try him at night, start again in an open field, gradually move to thicker cover, and mark the trail with surveyor’s ribbon, so you can help him if he loses the track. And remember; never shine your flashlight ahead of him, as it only breaks his concentration. Keep the flashlight pointed towards your feet, well behind your dog. Now he is ready for the next step, as this is the fun part, you may have to wait for deer season, as most butcher shops that process deer would be more than happy to give you a 2ft.X3ft piece of deer hide, just make sure to rub a little fresh blood on it (both sides) even better is if you live anywhere near deer country all you will need is a freshly hit deer, remove a piece of hide from it, rub some fresh blood from the carcass on it. Now you have your new training tool, which can be used over and over, just put it in the freezer at the end of the training session or replaced with a new one if it gets to ragged, at you convenience. 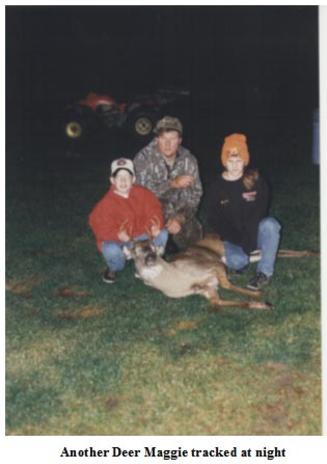